Sugar Daddies Can Be on The Hook 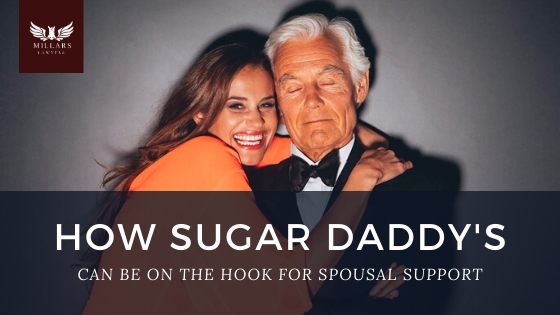 In continuation of my previous blog on Common Law marriages, I found an interesting recent case law dealing with the definition of a spouse under the Family Law Act – Jackson v. Moore. In this case law, the parties were never married. They have two children together. But there was a dispute as to whether they ever cohabited with each other. The two had a sexual relationship with each other; and, there was no dispute regarding the children’s parenthood and the parties resolved their issues on custody, access and parenting issues.

Based on Jackson v. Moore, I shall address a few questions on Common Law relationship:

What is Meant by a Spouse?

Section 29 of the Family Law Act, says:
“spouse” means a spouse as defined in subsection 1(1), and in addition, includes either of two persons who are not married to each other and have cohabited,
(a) continuously for a period of not less than three years, or
(b) in a relationship of some permanence, if they are the parents of a child as set out in section 4 of the Children’s Law Reform Act.

As per s. 1 of the Family Law Act, “cohabit” means to live together in a conjugal relationship, whether within or outside marriage.

What Factors Determine A Spouse under the Law?

In order to determine whether a party is a spouse, it is essential to contemplate whether parties are committed to one another. In Y.S. v. S.B., the court determines the nature of the spousal relationship in the following words:

“ It is not just in living together or having sexual congress or sharing expenses or providing childcare. These acts taken alone, or even together, will not unequivocally create spousal relations.… [F]or a spousal relationship, what is needed is a consensual acceptance by two people of each other as spouses and so declared by each person to the other by his or her words and actions.”

This consensual acceptance is recognized in law only when both parties to the relationship expressly declare it.

There are other Molodowich factors to be considered for the determination of spouses – shelter, sexual behaviour, children, personal behaviour, fidelity, domestic services, social activities, and societal conduct.

Is it Mandatory to Live Under the Same Roof to Be Recognized as a Spouse?

Although the law says that each of the spouses has cohabited continuously for a period of not less than three years or a relationship of some permanence, but it is not mandatory to live under the same roof if the spouses have consensual acceptance of the relationship. In Hazelwood v. Kent, the parties were never married but had two children together. One of the spouses lived downtown close to his employment during the week, but he spent weekends living with the other spouse and the children in their home. The court held in this case that she was a spouse within the meaning of the Family Law Act and ordered spousal support.

In Jackson v. Moore, the court found that the parties were occasional sexual partners and held that the applicant was not a spouse within the meaning of the Family Law Act.

Given this unique case law, if one intends to live in a conjugal relationship with another person – it’s recommended that you seek legal advice before or during the relationship, in order to protect your rights. Millars Law brings a history of success, dealing with complicated family law disputes and will be happy to assist you.
Contact Millars Law when you Can’t Afford to Lose.