How Failing to Clean Off Your Car Could Get You Sued 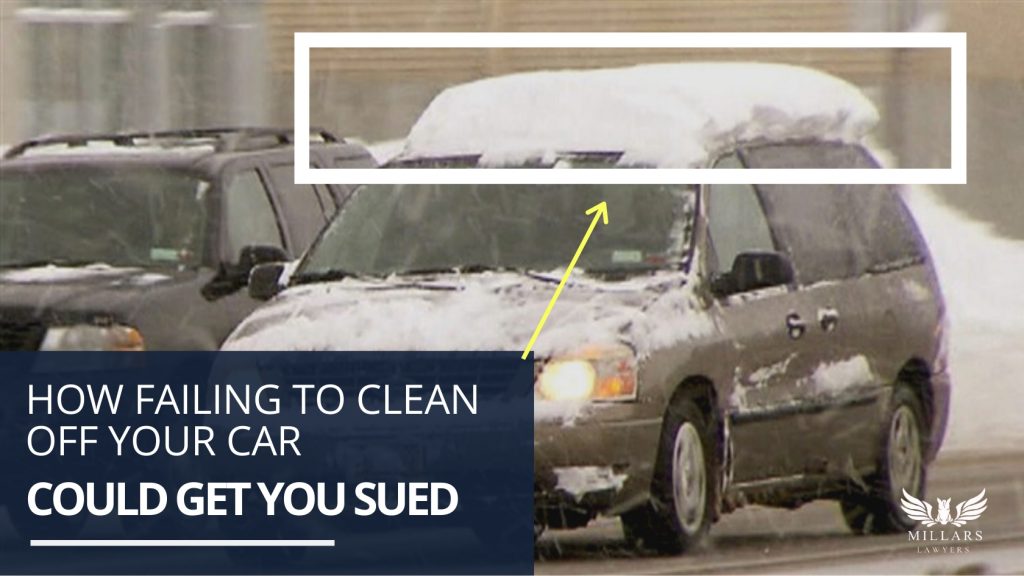 January, February and March can be a tough few months for a lot of people. Holiday bills come due, offices get busy again, the sun seems to have disappeared, and there’s soooo much snow.

Even in an unseasonably mild February like it was, snow still seems to be everywhere. On roadways, sidewalks, and even on top of cars.

Close your eyes and picture driving to work the morning after a massive snowstorm. If you’re like me, one of the first things you imagine is snow and ice flying off of the top of vehicles whose drivers didn’t take the time to clear them off.

Usually, this is just a minor annoyance. Canadians are used to all manner of stuff flying into their windshields during winter. But sometimes, especially when driving at high speed, flying snow and ice can be an enormous hazard. This is especially the case when roads are bad as well, making it tough to stop or swerve in response.

In law, you are responsible for an accident if you fail to exercise the “standard of care” that would be expected of a reasonably prudent person, and because of this failure, an accident occurs. Failing to check for and/or remove accumulated snow and ice that you ought to have checked for before travelling on a highway violates this standard of care.

The legislature has recognized how dangerous driving with accumulated snow and ice can be. The government has even introduced a Bill to penalize those who don’t remove snow back in 2014. While that Bill died when there was an election called, it faced little resistance in the house. And it’s important to remember that just because something is not illegal, it does not mean that it can’t be found to be negligent if it causes someone to hurt themselves.

If you’re one of the people who don’t clean off the tops of their car after a big snowfall- hey, I get it. It’s early in the morning, -20 degrees, and you’re going to be late for work. The last thing you want to do is take extra time to clear all the snow and ice that’s stuck to the top of your vehicle. But like so many things in life, a little extra effort on the front end can save you a TON of time and money on the back end- in other words, I encourage you to ask yourself whether that extra 5 minutes you save by not clearing the top of your vehicle is worth a potential accident. If not, it’s time to keep that snowbrush out a little bit longer.

Contact Millars Lawyers When You Can’t Afford to Lose.

1. Markel Insurance Company of Canada v. Certas Direct Insurance Company, 2011 ONSC 6069 (CanLII) dealt with the duty of a truck driver to clear snow and ice from his trailer, but the same reasoning to anyone using the roadway.

PrevPreviousSugar Daddies Can Be on The Hook
NextThe Current & Most Common Frauds Happening Now in London, OntarioNext