Don’t Let the Government Decide Who Gets Your Assets 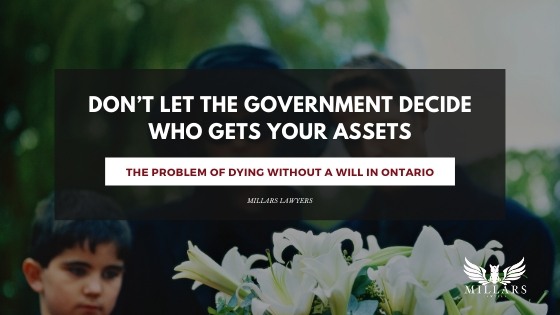 It’s scary how often we hear married clients say that they do not need a will in Ontario because their spouse will get everything they own upon their death. This couldn’t be farther from the truth in Ontario, and by thinking this way, you could put your family in a very difficult position.

If you do not have a will and die, you are considered by the government to die “intestate”. It doesn’t matter if you are married, have children, or have nothing to leave– if you die without a will you become subject to the Succession Law Reform Act.  This legislation governs how assets of deceased patrons are distributed.

The Succession Law Reform Act legislates that when a person dies intestate the first $200,000 (called the preferential share) of the deceased’s net estate (after taxes, funeral expenses etc.) will go to the spouse. Any funds remaining over and above the preferential share will be distributed evenly amongst the spouse and children (even if they are adults) of the deceased.

For example, consider a person with $500,000 in net assets passes intestate:

This is problematic for those who don’t want the government to decide who gets what, even if it is “only a little”. I too only have “a little” but what “little” I have I want to go entirely to my husband upon my death, and before I had a Will that would not have happened.

Contact Millars Law today to have a say on who gets your assets and where they go when you die. We have packages that include the Last Will and Testament with Powers of Attorney documentation.