The Statutory Deductible…The Weapon Insurance Companies Use To Hurt People That Every Ontarian Should Know! 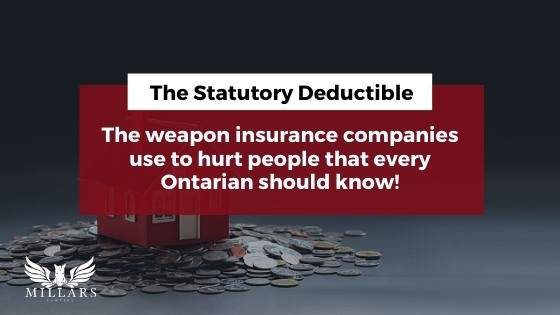 One of the most challenging aspects of being a personal injury lawyer is having a difficult conversation with a car accident victim. The statutory deductible will negatively affect their compensation.

Thanks to the insurance lobbying, there is a minimum threshold requirement that any claim for pain and suffering caused by a car accident must reach. Since juries are not told about the deductible (another legislative win for the insurance companies), people must know about this issue!

In the 1990s, someone who got in a car accident that at fault had a difficult road to getting any funding for treatment not covered by OHIP. Conversely, people hurt in an accident that was not their fault could sue no matter how minor their injuries were. To help even the scales, the Ontario government introduced the “no-fault” accident benefits scheme we now have. In exchange for this, the government introduced a $10,000.00 deductible on all claims for pain and suffering damages (also called “general damages”). The idea was that to have a no-fault accident benefits scheme, there needed to be a bar on minor accident claims so that premiums wouldn’t skyrocket.

While this idea was good in theory, it opened the door for a landslide of legislative victories for insurers that have resulted in people with legitimately serious injuries not being able to achieve fair compensation, all in the name of “keeping premiums down.” Raise your hand if your auto insurance premiums went up during the pandemic even though fewer accidents have occurred. (Mine is up!)

The first victory was convincing the Liberal government in 2015 to triple the deductible to $30,000.00. This was problematic since awards for general damages haven’t gone up that much since the 1990s. $10,000.00 was still a reasonable threshold to avoid frivolous claims. But now, people with legitimate injuries would have a real risk of receiving no compensation.

The second was convincing the Ontario government to index the deductible to inflation. Every year, it rises, and in 2020 it is a whopping $39,556. In case you were wondering, awards for general damages are not indexed for inflation.

The deductible applies to any claim below a certain amount, and that amount is also indexed for inflation. In 2020 that amount was $131,854.01. You might be thinking that this would ensure that people with severe injuries don’t need to worry about the deductible, but you would be wrong. The fact is, general damages in Canada are not that high. The cap is currently about $360,000.00, but this is only for the most serious of injuries (think someone being rendered quadriplegic). Someone with chronic, debilitating back pain caused by a car accident might only be awarded $100,000.00. Thanks to the deductible, it would be reduced to about $60,000.00.

But even $100,000.00 is a very high award for general damages, which the majority of car accident victims with legitimate injuries will not always come close to. In these cases, the lack of information about the deductible that juries are given is pronounced. In A.B. v White**, the Jury awarded a Plaintiff with severe chronic pain $42,250.00. Thanks to the deductible, this amount was reduced to $5,760.00! There is no way that the jury intended for the Plaintiff to receive this sum, but thanks to the deductible and the fact that they didn’t know about it, that’s exactly what happened. The presiding judge, Justice Macleod, called it a “disastrous outcome” for the plaintiff. He also noted a legislative intention that all but the most significant claims for injured motorists be eliminated, especially as the deductible continues to rise and there is no evidence that jury verdicts have kept pace with inflation.