The Hidden Dangers of Plastic Surgery 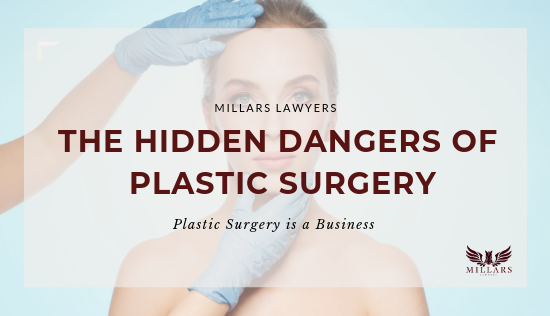 Plastic Surgery is a Business.

Recently, there has been a significant increase in private operating rooms.  They are mostly cosmetic surgery centers that operate under the supervision of the business owner and surgeon.  Yes, they are licensed and have some measure of supervision…But a large percentage of botched surgeries come from these clinics who aggressively advertise to get your business. Sometimes bargain prices come at a cost and we believe you should be extra vigilant before you decide to put your life in the hands of someone running their business as a profit center.

Never hesitate to ask very tough and direct questions before you sign the permission form to put you under. There are countless horror stories about local clinics that botched surgeries and ruined the lives of perfectly healthy people going under the knife. In fact, we have represented a number of them. Yet, the most disturbing element is the amount of money spent on radio ads geared to seduce patients into the clinics…and then the discovery of the cost-saving measures employed that put patients at risk.

Do not assume that because a company can afford radio ads or billboards they are well established or the best option. Perhaps their money is being spent on the wrong places. It costs a lot of money to rent operating space in a hospital, so from a business perspective, it makes sense to rent space outside of a hospital. But, if something goes wrong where would you rather be?

These off-site locations are called ‘surgical centres’ and they can be great, but you must be extra careful.

In 2018, Nikki Carruthers told the Toronto Star that her cosmetic surgeon explained breast augmentation surgery as something akin to getting a haircut. The doctor’s sales pitch was brief, he glossed over the risks, and he was far from informative…but he had very compelling advertisements to get her in the door.

Carruthers had to have her implants removed. Upon removal, the doctors discovered the right implant had ruptured, and both implants showed capsular contracture.  She was being poisoned by the implants and this was totally preventable and should have been identified much sooner.

In 2012, Dr. E.J  was an unqualified cosmetic surgeon placing his patients at grave risk by excessively sedating them during tummy tucks, breast augmentation, liposuction and facelifts in an affluent neighbourhood in Toronto.  This doctor used ‘extremely dangerous drugs without proper training,’ and his ‘cavalier’ attitude to risk was ‘appalling’ according to the National Post. In 2006, one woman under his care died two days after he performed liposuction and an abdominal panniculectomy.  The Chief Coroner found that the level of care she received was suspiciously sloppy.

The College only reprimanded this surgeon and he can still conduct procedures not requiring anesthesia.

In London and Sarnia, a well known cosmetic surgery center all over the radio with commercials botched so many procedures and had so many lawsuits against him that he became known in our circles as the ‘Butcher of Bluewater’.

This “surgeon’ now works out of the southern United States as he cannot practice in Canada anymore.

So what can you do to protect yourself and your loved ones?

Ask your doctor how many procedures he/she has undergone to date, how long he/she has been providing such procedures and any and all risks associated with this type of procedure. You can ask if they have ever been sued for the procedure they are offering to do to you. A good professional will respect your question and put your concerns at ease.   An arrogant butcher-doctor might be insulted by you daring to ask him such a personal question. Get to know your surgeon before he cuts you open as opposed to learning about him after the surgery has gone wrong.

Do your homework on the facility or surgical center.  Ask questions about the equipment, the anesthesiologist,  sterilization procedures and the emergency protocols to get you to the hospital if necessary.

Google is a huge asset.   Look at the Google reviews, and find medical review sites.

If you or someone you know has fallen victim to a bad procedure resulting in personal injury, contact MILLARS Lawyers ASAP at (519) 657-1LAW for a FREE legal consultation.