How Drinking On a Pool Noodle Could Cost You Your Licence 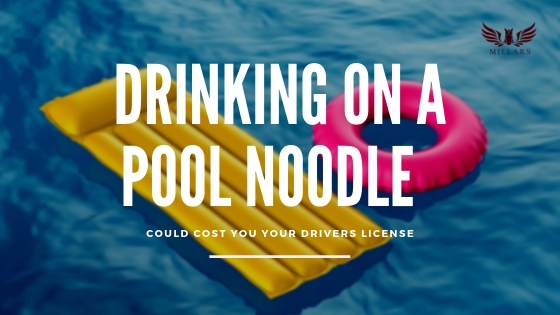 If you are heading out on the water this summer, you need to know that the courts have sent a clear message that water and alcohol don’t mix.

Recently, an Oshawa man was convicted of impaired driving while canoeing under the influence. David Sillars was drunk and high when he took his girlfriend’s 8 year-old-son out for a boat ride. Sillars rode the canoe with the child in dangerous conditions; the canoe eventually tipped, which resulted in the drowning death of the young boy. The conviction was the first of its kind in Canada and has resulted in a more narrowed focus on charging those enjoying alcoholic beverages on all types of personal floatation devices on public waterways.

The new impaired driving laws make it a criminal offence to operate a conveyance while impaired by drugs or alcohol.

It doesn’t just stop at canoes though. A “vessel” has now been defined as anything capable of navigating a waterway. Other things that can be used to navigate waterways include pool noodles, inner tubes, paddleboards, giant inflatable unicorns, and the like. If you are impaired and on one of these, alone or with others, you could face prosecution for impaired driving.

This comes even though there is no evidence that alcohol plays the same role in paddling or floating as it does with driving–despite the fact, that there is no motor insight.

The worst part is that the penalties if convicted are the same as impaired driving; which includes, mandatory fines and the loss of the privilege to drive even though you weren’t driving when charged.

Luckily, the recent case that set this ridiculous ship afloat is likely headed for appeal. However, this does not mean that many others this summer will be at risk. The court has sent a clear message that self-propelled watercraft’s and alcohol don’t mix. The issue is that they have taken it too far and criminalized seemingly harmless activities.

If you or anyone you know has been charged with any kind of impaired driving, you need lawyers who will fight to ensure the government does not bully you.

Choose Millars Law when You Can’t Afford to Lose.