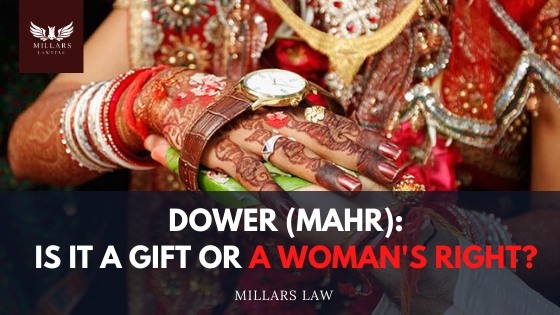 Misinterpretation of the Dower or Mahr in the Canadian legal system has given rise to unexpected and unwarranted outcomes. In a multi-cultural society of Canada, the legal system doesn’t import the traditions or rituals unless they commensurate with the Canadian legal system. Dower or Mahr is more a right of a woman than a gift under the Islamic Injunctions. Sometimes it is mixed up with Jahez, which has nothing to do with Islam – Jahez is provided to the woman normally by her parents for her living and it’s treated as a gift. Jahez is even prevalent in non-Muslim families in South Asia. Whereas, Mehr can be wealth, money, property or anything the wife desires in tangible or non-tangible form. Its treatment as a gift in the Canadian Legal system triggers complications in the family law.

What is Dower (Mahr) in Islam?

In Islam, Mahr is the lawful right of a wife at the time of her marriage and it can’t be taken back without her will. The question arises wherefrom this Mahr right originates? I would like to relate the meanings of a few verses of the Holy Quran:

“And how could you take it (back) when you have gone in unto each other, and they have taken from you a firm and strong covenant? [Sorah Al-Nisaa]”.

“But if they, of their own good pleasure, remit any part of it, take it, and enjoy it without fear of any harm (as God has made it lawful) [Sorah Al-Nisaa]”

What are the Forms of Mahr?

Mahr can be divided into two parts: first, the muqaddam, or the prompt mahr, which must be given to the wife immediately at the time of the Nikah/marriage ceremony. The second part of the Mahr, called the mu’akhar is a deferred and a promised part of the Mahr, payable to wife at an agreed-upon date after the consummation of the marriage. In the event of husband’s death, the deferred Mahr is paid from his estate and it is given preference on all his other debts and liabilities.

How Do the Canadian Courts Treat Dower?

In Court of Appeal for Ontario’s decision in Abdollahpour v. Banifatemi, the court decided on the dower (Mahr) issue. In this case, an Iranian couple married in March 2012 in Ottawa. In accordance with Iranian Culture and traditions, the husband’s parents transferred to the bride a 50% interest in a house in terms of Dower (Mahr) by way of a deed of gift.

The couple separated in December 2013 and the husband commenced divorce proceedings, along with an action from his parents, asking the bride to return 50% in the property. The husband and his parents raised a couple of arguments: saying that the bride’s father promised to return the interest in the property if the relationship is broken. They also argued that the bride entered the marriage with the fraudulent intent of securing a 50% interest in the property and to obtain permanent resident status in Canada. They further argued that the groom’s parents signed the gift deed under duress or undue influence.

Court of Appeal for Ontario dismissed the groom’s appeal and endorsed the motion judge’s decision to reject undue influence argument and found that it was a valid gift deed.

In another decision from the Supreme Court of British Columbia, A.M. v M.S., 2017 BCSC 2061, the court didn’t rule on the dower (Mahr) issue in the absence of proper expert evidence – as per the rules of the Court.

Difference Between a Gift and Dower

For the determination of a valid gift in the law, there are three elements:

Whereas Dower (Mahr) is not an option but an obligation on the part of the husband to pay to his wife at the time of marriage and it is treated as a condition precedent for the validity of marriage (Nikah) in Islamic culture.

Can an Expert Evidence Make Any Difference in Your Case?

I think a Muslim Scholar, having the knowledge of Canadian laws, can make a difference in convincing the court that Dower (Mahr) is not a gift but an obligation; and, that expert is available for cross-examination in the court.

I would like to conclude that Canadian Courts only enforce civil rights arising out of positive law and not from religious laws. Nevertheless, if non-compliance to religious obligation corresponds to the violation of civil law, the courts can play their role. It is the Family Lawyers’ job, representing their clients, to convince the courts for accepting Dower (Mahr) as a right of women rather than treating it a gift.


Contact Millars Lawyers When You Can’t Afford to Lose.

PrevPreviousPot Hole Laws That Can Get Your Car Repairs Covered By the City
NextCoronavirus: 5 Things You Need to Know From a Lawyer’s PerspectiveNext