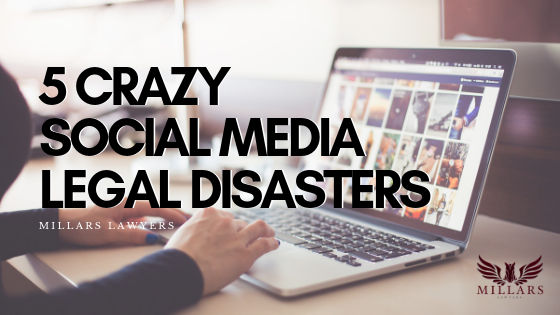 Social Media is all the rage, billions of people use social media pages daily to like, update, follow, stock, or unwind. However, there are many potential dangers with using social media. The basics are lack of privacy and sharing your life with otherwise strangers. The more pressing ones that people don’t think about are the legal implications that can be involved with social media use. Peoples actions on social media are leading to serious jail time and lawsuits and its time you learned the consequences for yourself as well as some interesting stories!

One client came to us after suffering bullying on social media for over a year. This woman’s ex-spouse had created numerous anonymous accounts that he used to harass, demean and bully this woman. The woman felt that she could do nothing but take the verbal abuse on the internet. Instead, her ex-husband was charged and later sued for his actions—making him pay dearly for his bullying

2. High School Students Charged with Child Pornography
It’s become commonplace for high school students to exchange naked or half-naked pictures of each other on social media platforms like Snapchat. In one example, a high school student shared a semi-clad photo of a younger classmate with a friend.

Distribution of Child Pornography, also known as Section 163 of the Criminal Code is universally recognized as the worse charge in the eyes of the law. Snapchat is not harmless and could result in a minimum of $20,000 In legal fees—and that doesn’t even come with a promise to clear one’s name.

In the example above, a recently turned 16-year-old asked for a naked picture from a 14-year-old, who was about to turn 15. He screenshots it, and his friend who is beside him asks him to send it to him, which he does. The friend tells his girlfriend, who tells her mom, who calls the other girls mom, who calls the police. Next thing you know, the young boy is in jail facing mandatory prison time. The girl was only 12 months younger than him, but by law, she is underage.

His life is turned upside down in the process, and he is now facing criminal charges that could follow him for life. There is no doubt that this was a dumb mistake by a teenager, but it is really serious, and his life could be ruined.

3. Fired for Using Facebook When “Sick”
A recent case we came across involved an employee who was fired because she updated her Facebook location on a day that she called in sick. The woman updated her location when she went to a spa for a steam bath to clear her sinuses. Her bosses didn’t buy it and thought she was taking it easy, and the next day she lost her job. Some bosses create fake profiles and try to friend employees to keep track of them. Be cautious about this and always assume the worst person can see your feed.

4. Sued for Posting a Picture of Your New Puppy
A family purchased a puppy, and upon signing for the pup, they did not read the fine print stating that they were not allowed to breed their dog. Later on, they decided to breed their dog with a friend that had a similar breed. They posted the pictures on Instagram. Little did they know, the breeder used a search program to find images of that breed on social media and discovered the photos. Later, the family received a letter from a lawyer asking for the $10,000 penalty for breeding infractions. Attached to the lawsuit was the Instagram photos as evidence and the family was faced with in an expensive lawsuit.

5. Busted: Cheating On Social Media
So many couples break up after a significant other is caught cheating on social media. It’s too easy to openly catch people who are cheating when the majority of social profiles are public. The most jaw-dropping scenario we came across is a woman found her husband using dating apps to cheat on her. The woman decided to confront him by creating a fake profile and meeting up with him. Let’s just say, when they met each other for a drink the silence was painful.

What’s your crazy social media story? Leave it on the comments on Facebook or email us at info@millarslaw.com. Millars Lawyers are here when you can’t afford to lose, contact us today for a FREE consultation—no story is too crazy for us!

PrevPreviousWhy You Need To Review Your Auto Insurance Policy ASAP To Avoid Catastrophe
NextAre you TOO Canadian? Why Canadians Lose out on Thousands of Dollars Each Year. Next