Talking Medical Malpractice in the Age of COVID-19: You still have rights 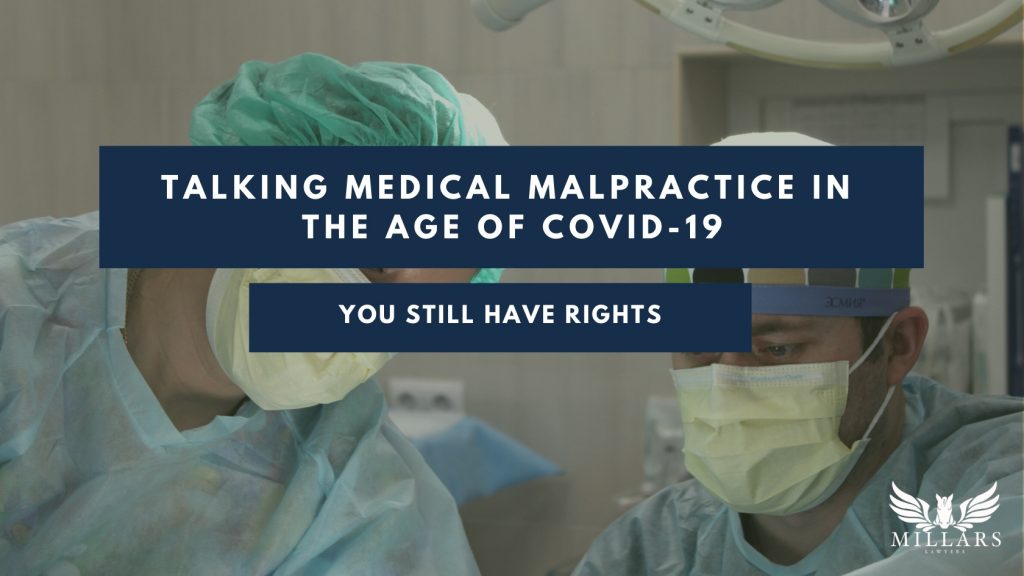 The consequences of this pandemic will be long-lasting and multidimensional. Everyone is stressed; Our front line workers are overworked and worried about their health and safety. Our government is trying to balance the interests of the economy and public health and most people just want to keep their jobs and go back to normal. The tragic stories will increase as casualties mount from the COVID-19 pandemic. We will have economic casualties, COVID Casualties and they will be covered non-stop in the media. But there will be other casualties that go unreported.  When a system is stressed more mistakes happen, some minor, some major and they are often forgotten in the noise of the Major Crisis.

This article will likely draw some fire for daring to suggest our medical system can do any wrong as they fight on the front lines against the virus. But I am not shy about diving into issues that are non-linear and controversial. I have been advocating strongly for the protection of our front line workers, they are stressed, overworked and under-protected. I want that to change, but I am not so naive as to think that those working conditions won’t cause more mistakes that directly impact the lives of our citizens that go to the hospital to be healed.

That is exactly why there is insurance, to allow for such mistakes and not bankrupt the nurse or doctor doing their best, but also compensating the injured person whose life was ruined by an avoidable error.

Let’s look at a case in London that may be worthy of more scrutiny. Recently in London, Ontario, there was a viral story being circulated about a father of triplets who died in his basement of COVID-19. The account we read was very disturbing. The otherwise healthy man went to get tested after he started experiencing flu-like systems and had trouble breathing. He tested positive and was sent home despite his worsening condition.  A week or so later, he had lost a significant amount of weight and was struggling. He called the hospital and he was told there was nothing they could do for him and to not bother coming to the emergency room.  A few days later he passed away in his basement alone.

In this tragic example, it seems to me that once the man reported he was having trouble breathing, had lost a huge amount of weight and was having cognitive issues he should have been admitted to the hospital immediately. This could have saved his life; There are ventilators there for this reason.

The tough question was if this was preventable, did administrators limit his access to proper care because they were overly concerned with their own safety or keeping beds available? When I examine the timeline of these events, it does not appear that London’s hospitals were running at maximum capacity. The man could, and likely should have been admitted to the ICU. He and his family should have received clear instructions on what symptoms and conditions warranted his return to the hospital. It should have been clear, and there should have been regular follow up on his condition and recovery.

Why was he being told to stay home when he was in serious distress? Perhaps he under-reported his conditions and didn’t convey the symptoms well to the hospital or 911 dispatch, this can happen when someone is in really bad shape as well, they get confused, anyone who receives a call from a COVID-19 confirmed case and hears that situation is worsening but engage in some very clear procedures to preserve and protect life. From what I read, I have some real concerns that proper procedures were followed.  The details matter and we do not have all of them, but this is a case where people can be hurt by bad decisions.

The stress of this crisis will create increased risks for non-COVID-19 patients as well.

Imagine what would happen if you, your family or friends experience a medical emergency not associated with COVID-19.  Like a pregnancy, or burst appendix or just a broken leg. For the most part, we don’t have to worry. Canada has one of the best medical systems in the world and our professionals do amazing work. But the system is stressed; Now more than ever is the time to be well informed about what to do if you or a family member needs medical care.

Very few people appear to be writing about patients’ rights and the effect that COVID-19 might have on medical malpractice cases. I suspect that this is partially because of how much respect and praise we are dedicating to the medical profession (deservedly!) for selflessly working at the front lines of this war. The idea that we might discuss a possible lawsuit against those who bring such courage and skill to their work every day in these crazy times is unfathomable to many.

Nevertheless, the very skill and courage that makes doctors and other healthcare professionals so indispensable also imposes a duty of care on them that does not disappear during a pandemic. As long as a doctor/patient relationship exists and has not been altered by statute (so far it has not), the duty of care remains in place.

It is, unfortunately, a known fact that for decades emergency rooms in Ontario have suffered from overcrowding. The all-too-frequent result of this is that it results in doctors and nurses seeing more patients than they likely should during a shift. Healthcare professionals are some of the most skilled and valuable members of our society, but they are still people, and as such, they make mistakes. Unsurprisingly, numerous studies have discovered a concrete link between an increase in hospital workload and an increase in adverse events.

When a mistake is made because a doctor or nurse did not observe the standard of care that would be expected of a similar practitioner, and this mistake causes injuries, a cause of action in negligence arises. There is no exception carved out for those who are “extra-busy”- once you are seen by a medical professional, you are their patient and have the right to be treated in accordance with the standard of care.

It is essential for someone who might be a victim of a medical malpractice case in a busy hospital in the coming months to remember this, and that you can respect the work our doctors are doing while still standing up for your legal rights.

It is also important to note that with all other aspects of this crisis, COVID-19 and its effect on the legal treatment of doctors and hospitals is evolving. Under the Emergency Management and Civil Protection Act, R.S.O. 1990, c. E.9, the Ontario Government has the ability to authorize a class of people (such as doctors) to render services to another class of persons (such as those diagnosed with COVID-19). In a situation where they are carrying out their duties under this act, a doctor could only be sued for malpractice if they acted in bad faith.

While this has not occurred yet, it may only be a matter of time, and there is also no telling what other measures the government might take depending on how bad the situation in our ER rooms gets. Here at Millars Law, we are staying on top of all of the developments in the law related to COVID-19, and encourage you to contact us if you have any questions.

PrevPreviousDon’t fall for the Bait and Switch: Is Price Gauging Really the Problem
NextWhy Muslims Must Get an Islamic WillNext