Marriage vs. Common-Law: What You Don’t Know Could Hurt You 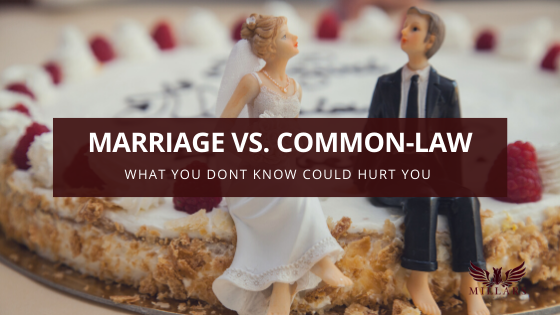 With the marriage rate decreasing and divorce rates increasing, I am finding that I am getting more and more questions about common-law relationships. Divorce and separation are expensive, stressful and life-altering– so many wonder why they should go through the marriage process in the first place. However, before swearing off marriage entirely its important to understand common-law relationships as it is often not the same as marriage.

There are many misconceptions about common-law relationships and rights arising on separation. Some people think that common-law couples have the same rights as married couples when they separate. But this is not the case in Ontario. Few rights still arise between the common-law spouses, based on the length of the relationship or if a child is born/adopted during a relationship.

In this blog, I will address and answer the most frequently asked questions I receive about common-law spouses’ rights and responsibilities.

1.Does A Common-Law spouse have Property Rights?

Under the Family Law Act, a common-law spouse is eligible for spousal support, subject to some qualification. In order to qualify for spousal support, the spouses must have cohabited with each other for at least 3 years continuously or has a relationship of some permanence that resulted in having a child – which also includes adopting a child.

For cohabiting couples, the obligation to pay child support under the Family Law Act is different than the obligation under the Divorce Act. Under the Family Law Act, a parent’s obligation to support a child is defined by if the child is a minor or is enrolled in a full-time program of education. Whereas under the Divorce Act, the definition of a child of marriage is broader and includes a child who is even the age of majority, under the charge of parents, but unable to acquire the necessities of life due to illness, disability or some other cause. Regardless, a common-law paying parent will have the same liability to pay child support under the Child Support Guidelines as do the married parent – based on the residential arrangement of the child (ren).

3. Can A Common-Law Spouse Get Custody/Access of Child(ren)?

4. Should Common-Law Couples Enter into A Cohabitation Agreement?

Overall, it’s important to understand the differences between common-law and marriage relationships before you decide what kind of arrangement you want with your partner. The best advice is to consult with a divorce/family lawyer to discuss your position and what you are entitled to before you are shocked if/when the relationship falls apart.

Have any other questions about common-law or marriage that was not answered in this blog? send them to me at nasar@millarslaw.com!