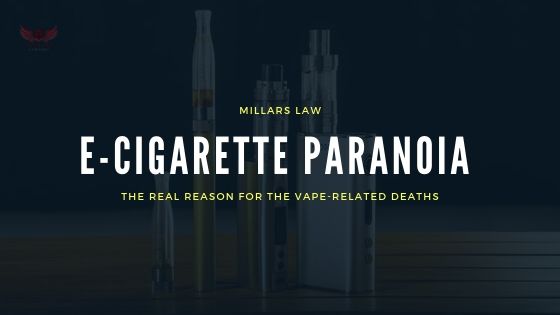 Who wouldn’t be concerned about e-cigarettes following the recent news cycle about people dropping dead and being admitted to the hospital with lung failure tied to vaping?

Let me start by emphasizing that I am not a medical doctor, nor did I play one on TV.  But as a lawyer who has been heavily involved in the Cannabis industry and with a good ability to research I believe everybody’s Panic is completely misdirected…Here’s why:

The recent deaths and severe illnesses resulting from lung damage coincide very closely with a change in the black market world of cannabis vape cartridges. Stay with me because the explanation is fascinating.

What people don’t know is that the black market Cannabis Vape industry presents very real and present dangers to the public.

In the culture of cannabis, it is well known that the quality of the cannabis oil after extraction can be judged by the viscosity or thickness of the oil in the cartridge. It is because of this, that vape oil consumers will take the vape cartridge and turn it upside down to see if the bubble moves fast or slow. If the bubble moves slowly it makes the consum

er think that the oil is a high-quality cannabis product. Thick oil is good oil, and good oil fetches more money for the seller.

However, the black market is not regulated by anybody and the criminals in this industry are always cutting corners in an attempt to make money faster… and you guessed it, this is where the problem lies.

About 8 months ago, we started to see posts on Black Market Chat Rooms (Reddit) that discussed shortcuts to make their oil appear thicker. People started introducing vitamin E acetate into vape cartridges as an additive that can make their product appear very thick and maintain the same appearance.

This timeline coincides with the serious lung issues that started occurring in the last few months and not in the 3-5 years since the explosion of e-cigarettes.

Again, I am not a doctor but what I know is that when vitamin E acetate is vaporized it creates microscopic globules of oil that attach to the capillaries inside the lungs and limits oxygen intake.

The recent deaths and severe illnesses reported and connected to vaping reveal similar devastating consequences seen in pneumonia sufferers…which is where you essentially drown in your own lungs.

So 8 months ago, cannabis users looking for cheaper products or unable to get legal vape cartridges started inhaling Vitamin E acetate. Soon thereafter the disturbing reports started to surface. These people were suffering from the microscopic globules attaching to their capillaries preventing their lungs from absorbing oxygen, they were drowning unable to absorb enough oxygen to survive.

The introduction of this vitamin E acetate coincides directly with the recent deaths.  So although e-cigarettes are a concern we need people in the industry to take action as soon as possible and inform the public to avoid black market vapes totally as they have been distributed into the marketplace without any ability to track which ones are contaminated.

We need the regulators to recognize that legal vape cartridges are the best way to protect the public because we can at least exercise some control measures. If we stop legal vape cartridges the illegal black market industry in this area will flourish and more people will die.  To the best of my knowledge, the e-cigarette industry has never used anything like vitamin E acetate in its pens.

Also note, that we acknowledge that E-cigarette use is not healthy and is a problem for our kids.  We are not defending e-cigarettes, we are pointing out where the recent deaths are most likely coming from as many who vape nicotine juice also consume Cannabis Vapes.  Again nothing in this article is medical advice but it does come from research into the Cannabis Vape market with Experts in California.